This clinically relevant and evidence-informed 1-day course is designed to ensure attendees leave with a well-rounded, practical and theoretical knowledge of kinesiology taping. This course takes a hands-on approach to learning, so you will be confident in applying the skills you learn in your own setting, from day one. Developed by highly qualified physiotherapist, Jon Pringle, this course is relevant for all health practitioners who have an interest in developing or refining their taping skills for a wide variety of applications. 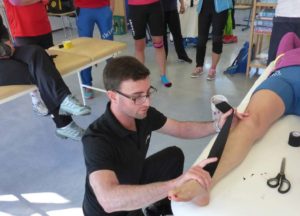 This clinically relevant and evidence-informed 1-day course is designed to ensure attendees leave with a well-rounded, practical and theoretical knowledge of kinesiology taping. This course takes a hands-on approach to learning, so you will be confident in applying the skills you learn in your own setting, from day one.

The course covers some of the most common sports and musculoskeletal injuries, giving you a range of practical taping experiences. Importantly, as well as learning the fundamentals of kinesiology taping, you will also learn how to be adaptable when it comes to taping in clinical practice. As we all know, no two patients are the same and we need to be flexible to be able to assist our clients as best we can. The course is designed for health professionals and the taping techniques covered on the course include:

Any allied health professional wishing to upskill in kinesiology taping. Particularly relevant for physiotherapists, osteopaths, myotherapists who are reasonably new to taping or looking to refresh/refine or learn new skills.

Jon works at Back in Motion on Bribie Island as a clinical supervisor and senior physio.

He is a British Sports Physiotherapist with a BSc (Hons) in Physiotherapy from the University of Brighton, a Postgraduate Certificate in Sports Physiotherapy (Merit) from the University of Bath and a FIFA Diploma in Football Medicine. Whilst based in Oxford UK, He spent several years as the physiotherapist for Oxford University’s sport’s teams and athletes, Contracted to the OUBC and worked extensively with the Women’s, Lightweight’s and college rowing teams, OUAFC (Oxford University Athletic Football Club), the Women’s Rugby Football Club (OUWRFC), hockey players, skiers, triathletes and many more.
Outside of the university Jon worked privately with several high-profile sports personalities in their preparations for the Olympic Games, Common Wealth Games, The World Athletics Championships, a successful solo 24-hour karting world record attempt and racing drivers of the GP2 Series, British Formula 3, EuroFormula Open, Le Mans, FIA World Championship and Audi R8 LMS Cup. During this time he also ran private clinics for the wider community, treating a wide client base of all ages and fitness levels, as well as lecturing for the Oxford School of Sports Massage and in the John Gibbons Body Master Kinesiology Taping Method.

After Oxford, Jon spent 5 years working in the Austrian Alps, to provide physiotherapy services for sports professionals, university staff, visiting guests and the local community, working with professional skiers, ice hockey players, mountain boarders and a World Nordic Walking Champion. Here he was able to build on his physiotherapy techniques with Dynostics analysis, Vo2 Max Testing and cell gym to maximise patient performance and recovery. During this time Jon founded Elite Therapie, a company that created and delivered courses in Kinesiology and Athletic Taping in central Europe.